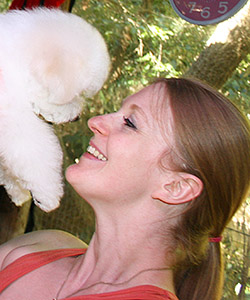 Georgina Covington has been surrounded by dogs all her life, growing up amid a pack of ten Old English Sheepdogs and one wiley Fox Terrier.  Animal welfare is her enduring passion, and her hair-raising adventures have encompassed everything from injured snakes and orphaned kangaroos to troubled horses and shy dingoes.

A biologist, canine behaviourist and Internationally Certified Master Groomer, she has worked – literally – with all creatures great and small, in zoos, vet clinics and wildlife and domestic animal shelters. 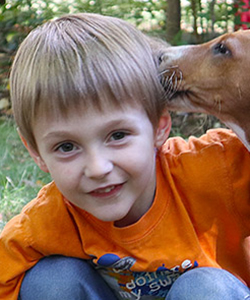 Born into the In The Pink team in September 2014, Daniel Covington already knows everything there is to know about dogs.  He can wash, dry and brush with the best of them, knows his way around a stripping knife and is already learning to clip and scissor!

When not helping in the salon, he can be found playing with something involving wheels! 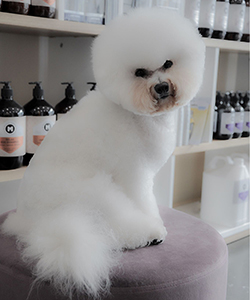 Sparkles the bouncy Bichon Frise joined us in February 2019 at 16 weeks, and has the biggest case of small-dog-syndrome known to man!  Forthright and utterly fearless, she stops all customers at the gate with a Earth-shuddering show of force her dearly departed Dobermann brothers would be proud to see.

When the world returns to normal, Sparkles has a big future ahead in the grooming competition arena, but currently she is content patrolling the boundaries and praying fervently she will wake up one morning miraculously transformed into a pit-bull. 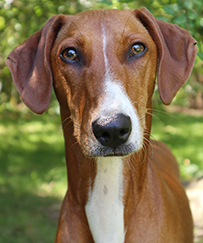 Joining us in March 2020 at 12 weeks, Kora is an Azawakh: a rare breed of sighthound bred by the Tuareg nomads of West Africa, traversing the Sahelian zone of Mali, Niger and Burkina Faso. Azawakh are coursing hounds and guardians, helping their masters catch food in the harsh desert environment by day, and protecting their camps and livestock from raiders by night.

Named after a West African instrument, Kora is just 5 generations down from her African ancestors.  Whilst Azawakh are fierce guard dogs, Kora has a keen sense for telling friend from foe, loudly demanding pats from her favourite customers. 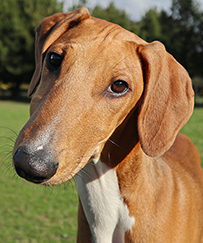 In West Africa, the kora is made from the gourd of a calabash plant, and so, it seemed only fitting to have Kora’s baby half-brother, Bash, join the family in May 2021.

The punkiest of punks and the kissiest of sappy kissers, he is a big boy with a big bark, but underneath at all, loves nothing more than a snuggly snooze on Georgina’s lap.

His maternal grandfather came straight from the Sahara, and Bashi’s cunning desert blood helps him steal sandwiches and slippers with lightening speed.

And watching over us forever… 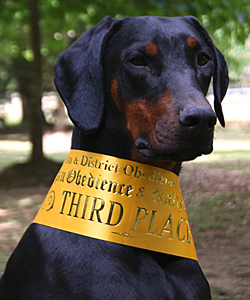 Seamus the Dobermann joined us in January 2012.  Ten months later, two days after his first birthday, he came Third in his first Obedience Trial, in a class of 27 dogs.

He was Daniel’s constant companion from birth.  With a fetish for ears, he smooched all he met, and had the most entertaining range of peculiar personal habits ever encountered. He had a passion for kissing cows, yet maintained an ongoing feud with a Shetland named Tallula.

He died suddenly of genetic heart failure in August 2020, aged 8, leaving a hole in our lives which can never be filled. 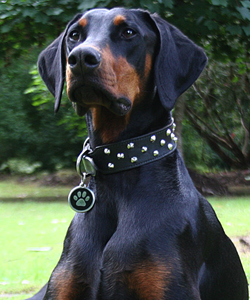 Fergal was the face behind In The Pink. His arrival in August 2010 changed Georgina’s world, leading to new goals, qualifications, friends and romance. Thanks to him, she leads the life of her dreams.

Fergal lived to worship his mum. Born with Obsessive Compulsive Disorder (common to his breed), he was prone to deep anxieties out of keeping with his imposing stature and big fat waggy bum. With flawless obedience skills and a yearn to work, he joined a demo team at 18 months, and ran many a class.  He died suddenly of genetic heart failure in August 2017, aged 7, and not a day passes when we don’t long for him back. 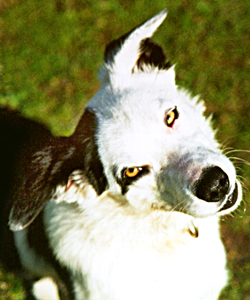 The memory of Kimberley the working Border Collie long kept the In The Pink team on the straight and narrow.  She was the most extraordinary dog Georgina and many of her colleagues have ever worked with, capable of performing any new task asked of her …at any age, under any circumstances… from herding and obedience to trick training and scent detection.

With us until the age of 12, her innate wisdom, and quiet, steady presence saw Georgina through some of the toughest times of her life, and she is very sorely missed.  Her picture hangs by our front door, those hypnotic, yellow eyes watching over us forever.